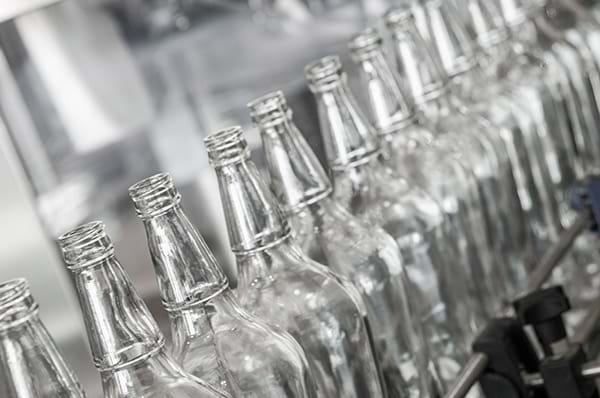 The Owens-Illinois glass container manufactory in Maastricht produces glass packaging for the food and beverage industry. On the night of May 13th going on the 14th of 2015, a fire broke out at one of the production lines that used molten glass from the furnace to mold glass containers. The exact cause of the fire was not discovered. Production line 11 suffered damage as well as the adjacent production line 12. In addition, the entire support structure and roof were damaged over approximately 300 m2. The fire was extinguished and the insurer, FM Global, was informed and called in Context, a firm of loss adjusters. That same day, AREPA was called to help get the plant up and running as soon as possible.

One of the challenges of the restoration process was the necessity to keep the glass production in operation, despite the damage suffered, as it is not possible to turn off a melting furnace in a glass manufactory and then turn it on again. The available substance in the furnace would solidify and could never be turned into a liquid again. Nevertheless, because of the repair activities, one production line needed to be out of operation for three weeks, but the other two production lines from the same furnace needed to remain in full operation.

Provisions had to be made in order to perform cleaning activities and to do the necessary repairs over the furnaces and forming machines. The glass furnaces and the production lines that remained in operation had to be shielded to avoid loss and contamination of the glassware due to the repair activities. In addition, measures had to be taken to create a bearable working climate as temperatures over and around the furnaces could go up to 90 degrees Celsius.

The strategy and allocation of tasks were clear:

The hall is approximately 40,000 – 50,000 cubic meters and has a heat source of approximately 1,300 degrees Celsius which made it a challenge to cool the hall. Moreover, it was necessary to prevent the occurrence of big differences in heat between the air and the glass as it could result in production faults. Owens-Illinois, Dolmans Calamiteiten Diensten and AREPA discussed various scenarios and problem solving approaches. Some approaches were difficult to perform technically and others appeared to be hardly feasible. In the end, work zones were created. Outside, very large radial blowers were used, while inside a number of fans and exhausters, an extensive structure of tubes and hoses as well as some smart solutions provided by the scaffolding constructor to transport cooler air to the places where this was needed and to remove the hot air.

“We had to deal with unbearable temperatures, even had to suspend the activities for a while, and for the repairs of the roof we even deployed the crane with the longest jib in the Netherlands,” said Paul van Beek, Operational Manager at AREPA. “Everything we encountered, required on the spot solutions from the team to continually deliver good work, focusing on only one goal: everything at Owens-Illinois had to be put on the right lines again as soon as possible.”

Dolmans Calamiteiten Diensten had to remove the soot and carbon residue from the machines, platforms, floors and so forth. While the cleaning itself went well, the team had to use a different approach than what would be used in ordinary environments. One of their specific tasks was to monitor that everybody working in the factory complied with the health and safety rules. Every morning at 9:00 a.m., all parties gathered to discuss the difficulties that had arisen as well as to anticipate any problems they foresaw. This open communication really contributed to the success of the entire operation.

Due to the extreme conditions, it took nearly five months to complete work that otherwise on average would have taken two months. Fortunately, open communication amongst team members allowed for a successful completion of this project. Owens-Illinois director said, “It was important for us to have one point of contact, and that was AREPA. Thanks to Paul and his colleagues, the entire project ran very pleasantly.”